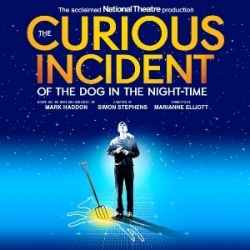 Translating novels into stage productions can live or die by reputation and acclaim. Quite rightly, Mark Haddon's best-selling and award-winning novel, The Curious Incident of the Dog in the Night-Time has managed to avoid the critic's sword by being a perfect marriage of dark humour, adventure and mystery, three facets that normally produce great theatre.

The story of Christopher, a reclusive teenager who becomes both an obsessive detective and suspect after the apparent murder of a neighbour's dog, has been an enthralling read since its publication in 2003 and has earned the author various prizes including the Whitbread Book Award for Best First Book. As a stage production, it has enjoyed sell-out runs at both the Cottesloe and National Theatres and is now set to celebrate its 10th anniversary by moving house!

From 1st March 2013, The Curious Incident of the Dog in the Night-Time will transfer from the National Theatre to a new home at the Apollo Theatre in the West End. The new run will continue until 25th May 2013, with tickets now available from us now, priced at £32.50 and £52.50 for previews until 8th March, or £35, £55 and £85 for standard shows. There are also matinees available at the same prices.