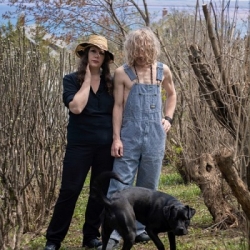 For a band that has crafted some of the most reflective and plaintive American rock music for the best part of twenty years, their choice of producer for studio-album number ten is perhaps a surprising one.

Wilco's normally jaunty Jeff Tweedy was installed as the guiding force on 2013's soon-come "The Invisible Way" on the strength of his work with soul-legend Mavis Staples. Low's soulful brand of Americana has been given a shot in the arm and a big kiss, all of which should translate into an enticing live show.

Low's last visit to these shores was to promote the 2011 album "C'Mon", their first ever Top 50 album over here, although previous collections such as "The Great Destroyer" and "Things We Lost in the Fire" caught the imagination of a hardcore element of followers that has been growing with every release. Could 2013 be the year of Low?

There's only two ways to find out - check out the album in January and then head to one of their shows in the spring. Low will kick off the UK leg of their Invisible Way tour in Birmingham on 24th April 2013, followed by Manchester, Gateshead, Glasgow, Bristol and London's Barbican on 30th April.

Ticket prices weigh in at around £19.50 and are on sale now.