Jägermeister Music Tour 2013 to feature Ghost, Gojira and The Defiled

Posted: 29th November 2012
Local bands to be announced in due course, bargain-priced tickets available for just £5 from Friday 30th November 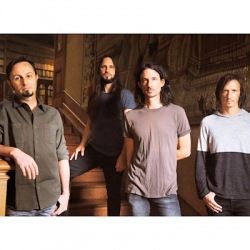 Yes, you read that right - once again your favourite German drinks-brand (no, not Blue Nun) have helped pull out all the stops to give metal and rock fans a real treat in 2013 with the cheapest UK tour since George Formby's post-war concerts.

The Jägermeister Music Tour 2013 will feature not one, two or three bands in one sitting, you'll also get warmed-up by a string of, as yet unannounced, local rock heroes. All for just a blue one.

The headliners for the entire tour, which kicks off in the spring, are Swedish metallers Ghost who have been threatening people's hearing since 2008, often shrouded in mystery and swaddled in hooded robes. Drawing influence from '70s black-metal such as Black Sabbath, the band are no strangers to the UK's rock audience - they played Download in 2011 and have supported Paradise Lost and Trivium on recent tours.

Joining them will be French outfit Gojira, again no strangers to these shores forming part of the wave of Northern European metal bands, signing to Roadrunner last year and issuing the acclaimed "L'Enfant Sauvage" in the summer. London's more industrial and funkier The Defiled make up what is a pretty decent line-up for (let me remind you) FIVE BRITISH POUNDS.

The tour starts in Sheffield on 18th March 2013, followed by Glasgow, Bristol, Bournemouth, Birmingham and finally Brixton. You can buy tickets from us from 9am on Friday 30th November. Oh, the price? (clears throat) £5 upwards plus fees. Jäger Bombs are optional.