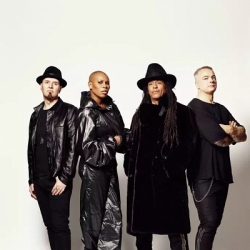 Regional fans have possibly been feeling a bit put out by Skunk Anansie's recent touring activity - there hasn't really been any, save for trudging from their hotel to Brixton's Academy this coming weekend. It's sold out, by the way.

But with the acclaimed new album "Black Traffic" reaching #42 (an improvement on their last two releases), demand for the mercurial Skin and her noisy boys is at an all-time high this century, hence the announcement of a full UK tour in 2013 - and there isn't a London show in sight (not yet).

With a new single just released in the form of "I Hope You Get to Meet Your Hero", Skunk Anansie's intent will continue next year when they begin touring on 13th March 2013 in Cambridge. Other stops include Norwich, Nottingham, Glasgow, Bournemouth and more until hitting up Brighton on 26th March.

We will have tickets to all shows, their first headliners since 2010, from 9am on Friday 30th November, with ticket prices starting at £24.

For your money, you can expect the usual visceral versions of hits such as "Weak", "All I Want", "Brazen (Weep)" and new album tracks.