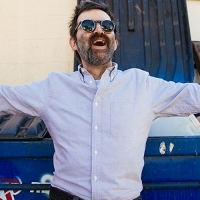 Regular listeners to BBC 6 Music may already be familiar with Eels' new single, "Peach Blossom". If not, you'll be able to pick it up on Mark Everett's charges' new album due out in February 2013. Entitled "Wonderful, Glorious", the collection marks the band's 10th studio album in a career that stretches back to a fallow period in the mid '80s, before the dawning of their golden era of cracking albums and hit singles.

Eels are one of many US bands who have conquered the UK way ahead of being installed in chart-rundowns in their homeland. Key album "Beautiful Freak" featured the hits "Novocaine For The Soul" and "Susan's House", both Top 10 hits here but barely able to scrape dimes back home. "Mr E's Beautiful Blues" from the band's biggest album to date, "Daisies of the Galaxy", carried their appeal over to the 21st century and things continue at a steady pace up to the present day.

All of which explains why Eels are heading back to the UK (and Ireland - they're loved there too) next year. By March, "Wonderful, Glorious" will be embedded in most fan's brains and will form part of the shows coming up. First stop is Belfast on 14th March, followed by Dublin, Manchester, Glasgow, Leeds, Brixton and lots more until tying it up in Birmingham on 30th March.