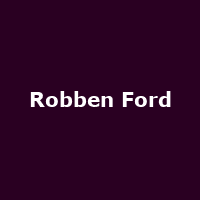 If you've been recognised as one of the 100 greatest guitarists of the 20th century (according to Musician magazine), then you're almost expected to be tapped for tips on how to recreate your sound. At the very least, you'll have been performing with a few other like-minded greats along the way.

In Californian Robben Ford's case, he's acknowledged both scenarios - he's performed and recorded with the likes of Miles Davis, Kiss, Yellowjackets, Joni Mitchell, Marcus Miller and Tom Scott and has just announced his own series of HD video masterclass series called, snappily, "Robben Ford's Guitar Dojo". There's a whole website dedicated to it (www.robbenfordguitardojo.com ) where you can learn the tricks of Ford's trade and maybe become one of the greats yourself.

Robben's own solo career hasn't exactly been understated - since the early '70s work with Jimmy Witherspoon, through the prolific '90s (seven albums) up to the present day, plus his collaborative work in the band Renegade Creation, Ford has remained the musician's musician without shifting millions or 'selling out'.

When it comes to his concerts however, it is likely most of his 2013 UK tour dates will sell out quickly. First stop is London's Leicester Square Theatre on 24th April, followed by Bath, Holmfirth, Glasgow and Gateshead. We have tickets to all shows, priced at Â£25 for regionals and Â£27.50 for the London show. Expect a masterclass of your own, including classics and standards from 30 years of recording.