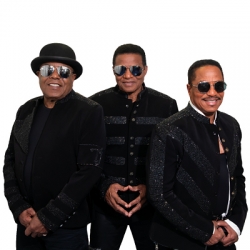 In 1969, five young siblings exploded onto American and British radios with their debut hit-single, "I Want You Back", originally included on their mentor's "Diana Ross presents The Jackson 5" album. By 1970, The Jackson 5 were pretty much all over the US having notched up four number 1 singles in as many months, while in the UK the same quartet of smashes, including "ABC" and "I'll Be There" grazed the Top 10.

But as they grew up, so did their music and by the mid '70s the line-up altered and the name changed to The Jacksons. Jermaine left to pursue a solo career (he had a stonking hit with "Let's Get Serious") and Randy Jackson joined Michael, Jackie, Tito and Marlon for one incredible ride for the next decade or so. You know the hits by now - "Blame It On The Boogie", "Shake Your Body (Down To the Ground)", "Can You Feel It?" and the number 1 UK hit "Show You The Way To Go" basically turned Radio One into a party and Top of the Pops became a mirror for aspiring performers from all backgrounds throughout the '70s and '80s.

After the success of the hit-packed "Triumph" album, The Jacksons lost their mercurial brother Michael to a solo career, going on to become the globe's hottest music star. By 1984 he was gone, leaving the remaining members (also minus Marlon by now) to squeeze out a follow-up to the "Victory" album - Jermaine had rejoined, but the R&B-based "2300 Jackson Street" barely bothered either side of the Atlantic. The legacy of The Jacksons has continued however, even after Michael's death in 2009. Next year, you'll be able to see why.

In 2013, as part of an ongoing world jaunt, The Jacksons will bring their Unity Tour to the UK for a handful of highly-anticipated concerts. Jackie, Tito, Jermaine and Marlon regrouped this year to perform all the classics to an audience still reeling from the tragedy three years ago. The UK stops will include Birmingham on 26th February, followed by Manchester, Glasgow, Bournemouth and Hammersmith on 3rd March.

We will have tickets to all shows on sale from 9am Friday 23rd November. Ticket prices start at £47.50/£50, depending on the venue. Demand will be massive so make sure you shake your body down to Allgigs for tickets!