J Mascis and co to support I Bet On Sky with string of dates, tickets on sale Saturday 17th/ Friday 23rd November 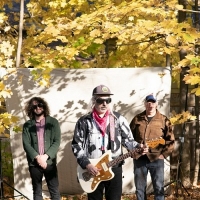 Without having to resort to anniversary tours, remixes and reinvention, Dinosaur Jr have quietly, scratch that, LOUDLY forged a career out of releasing consistently brilliant albums. Line-up changes have perhaps interrupted the band's sonic flow on occasion, most notably from the mid '90s until 2007 when the original trio of J Mascis, Lou Barlow and Murph regrouped for the thunderous album "Beyond" but, names aside, Mascis and his cohorts have maintained a ready supply of huskily-drawled guitar-driven rock.

2012 has seen the band 'celebrate' the 25th anniversary of their second album "You're Living All Over Me", all of which will culminate on 1st December with a one-off rendition of the album at, get this, Terminal 5 at New York Airport with Kim Gordon and Johnny Marr. Those two guests alone should give you some idea of just how influential that late '80s record remains - "Little Fury Things" blasted out of a foyer in an airport? Can someone get me a ticket?

Closer to home, Dinosaur Jr. have been quiet of late - until now. Their stonking new album "I Bet On Sky" is crying out to be unleashed at UK venues and that wish will come true at a string of shows early in 2013. The first stop will be Glasgow on 30th January, followed by Leeds, Manchester, Brighton and Bristol on 3rd February. It is highly likely that a London show will be added, maybe more.

Meanwhile, we will have tickets on sale for these shows (Â£18.50 + fees) from Saturday 17th November (Bristol), with the remainder on sale the following Friday (23rd) at 9AM.