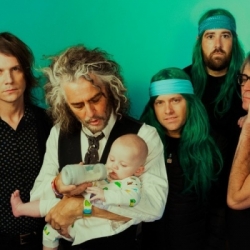 Formed an incredible 30 years ago, The Flaming Lips have ridden a more commercially turbulent rollercoaster in their history than most rock bands. In fact, after over ten years of releasing a blizzard of unrelenting psychedelia and - fer gawd's sakes - a quadruple set of CDs designed to be played on four different CD players in unison, Wayne Coyne's beloved band were short of imploding under the stresses of everyday living. Y'know, heroin abuse, crashes and family tragedies, not to mention their continued loosening grip on reality.

Finally in 1999, The Flaming Lips struck gold with the much-acclaimed and really rather special "Soft Bulletin" album. Taking their blueprint of expansive psychedelic experiments and applying them to pop music proved to be the perfect match and if you haven't heard the exemplary "Race for the Prize" and felt just a bit uplifted while sober or wasted, you haven't lived. It's that great a song.

But better was to come in 2002 when the mainstream accepted Coyne's crazy antics and the near-concept album "Yoshimi Battles the Pink Robots". Suddenly, The Flaming Lips were in huge demand and charming everyone with memorable concerts involving huge cuddly animals and helium-filled balloons, plus tunes. Proper tunes. Lots of them.

And the tunes will continue in 2013. After already issuing the well-received "Heady Fwends" album this year, The Flaming Lips have announced another new album, "The Terror". Oh and some very special shows in London.

The Roundhouse will host two back-to-back concerts by Coyne and co on 20th and 21st May in what promises to be an experience nothing short of religious. We will have tickets to both shows from 9am on Friday 16th November with prices set at £32 plus fee.