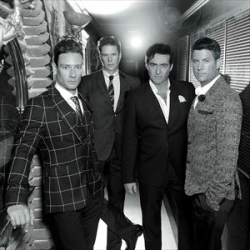 Two of the biggest names in popular classical performance will be joined at the hip for a lengthy European tour in 2013. Il Divo and Katherine Jenkins will join forces to bring you an unforgettable series of concerts designed to promote the vocal harmony quartet's upcoming "Greatest Hits" CD, as well as duets specially recorded with the Welsh mezzo-soprano.

The two acts haven't performed together on stage although they've been friends away from the glare of the lights for some time. Il Divo's unique operatic take on classic songs from the field of pop, as well as opera, have crossed them into mainstream territory since their debut hit the shelves in 2004. One of Simon Cowell's more inventive creations, Il Divo's hits on tour are sure to include "Wicked Game", from their most recent album of the same name, "Amazing Grace", "Nights in White Satin" and many more.

Katherine Jenkins is no stranger to sharing the stage with the greats - she's due on tour with Andrea Bocelli very soon (USA only), before heading back to represent her new Christmas album "This is Christmas" with a series of shows around the UK (tickets still available for most shows, not London or Gateshead - around £40 upwards).

But it's next year that will delight fans from both camps - a tour with both Il Divo and Jenkins promises rare duets a-plenty and an impressive range of songs. First stop in spring is Nottingham on 4th April 2013, followed by Brighton, Bournemouth and many more until London on the 19th.

We will have tickets on sale from 9.30am on Friday 16th November, with prices varying from £35 to £85, with a range of Meet and Greet options also available (various three-figure sums!).

Il Divo will also play a Dublin date at the O2 on 21st April, but note that Katherine Jenkins will not be appearing. Tickets for Dublin also on sale Friday, but from 8am.