Rod Stewart will Live The Life with summer 2013 UK Tour 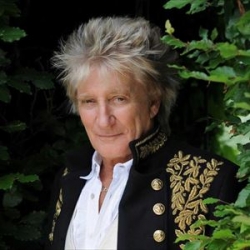 One of those ageless performers who doesn't seem to rack up the wrinkles is Rod Stewart, who will be an incredible 68 years young in January. Aside from the Tartan Terror's (Terry Wogan's affectionate nickname) illustrious solo career of some 40 years, Stewart's initial musical calling came in the early '60s when Ray Davies installed him as temporary vocalist in The Kinks, until adopting the Mod style and embracing soul and British R&B with Long John Baldry. In the late '60s, he worked with Jeff Beck to forge a new strain of heavy rock 'n' roll (arguably an influence on metal) and then became Steve Marriott's replacement in the (Small) Faces.

It's not surprising that Rod Stewart soaked up his collaborative experience to craft what has been a pretty varied solo career. Clearly the likes of Davies, Marriott, Baldry and Beck rubbed off on his early dabbling and by 1971, the first of an endless string of hit-albums began with "Every Picture Tells a Story", helped not least by the inclusion of the superb "Maggie May".

And so it continued - five straight number one albums on the bounce, constantly on Top of the Pops, women melting every time he so much as scratched his blonde mop of hair or breathed - Rod was, and still is, huge news. He's embraced rock and roll, blues, soul, folk, disco ("Do Ya Think I'm Sexy?" remains a landmark signature tune), MOR and, most recently, easy-listening with his classy renditions found within the Great American Songbook series.

The tradition of being the go-to man for respectful recitals has continued this year with his appearance at the Royal British Legion Festival (in front of the Queen, no less) and a new album. Incredibly, one genre Stewart hasn't tapped into before (apart from dubstep and grime) is Christmas but 2012 will see that change with "Merry Christmas Baby", an assembly of solo and duet versions of classic festive tunes. However, by next summer, he may have more on his mind in the form of his first tour of the UK since 2011.

Rod Stewart's Live The Life UK/ Ireland tour will kick off in Nottingham on 1st June 2013, followed by arena dates in London, Manchester, Birmingham, Sheffield and Belfast, before heading to Dublin on 29th June. We will have tickets on sale from Thursday 15th November (for Belfast) and Friday 16th November (for the remainder), priced in the region of £49 - £70, depending on location.