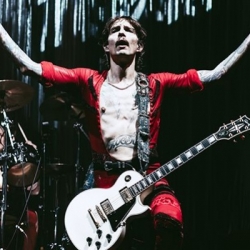 Ten years ago, classic-rock music was given a rude awakening and a jolly good overdue shoeing and it was administered by The Darkness, a band straight outta Suffolk and as camp, kitsch and far-removed from the po-faced attitudes of certain bands as it was possible to get. Dragging glam-rock into the 21st-century might have been a risky business in any other band's hands, but frontman Justin Hawkins and his steeds ensured that where there was hype, there was also substance to back it up.

And that substance came from debut-album "Permission to Land", issued in 2003. Before anyone dared hand in their treasured Spandex trousers to the nearest recycling bin, The Darkness made leopardskin-print cool again, before vaulting over most of the pop, dance and urban competition in the singles chart. "I Believe In A Thing Called Love", "Growing On Me" and "Christmas Time (Don't Let The Bells End)" put the fun back into rock and hit the spot amongst music-buyers by poaching bits of Queen, AC/DC and Whitesnake and throwing them into the Darkness' blender.

Ten years on, after a second less-successful album and a split, many had written The Darkness off. Mistake. New third album "Hot Cakes" has recently power-rocked its way to #4 in the UK, as well as rack up Top 20 placings in five other countries - no wonder they've just announced a huge world tour.

Their 'Let Them Eat Cakes' tour begins in Sheffield on 1st March 2013, before continuing on to Manchester on the 2nd, then Glasgow, Newcastle, Wolverhampton and finally Hammersmith on the 7th. We'll have tickets on sale from 9am Friday 9th November, priced from £25 upwards (£27.50 for London).