Posted: 3rd January 2013
Hilarious, hard-hitting Hunter to perform across Britain during late spring and the autumn, tickets on sale now 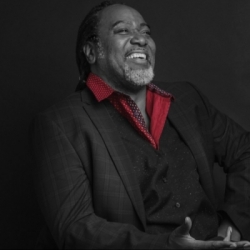 Reginald D.Hunter will be parking his appearances on TV for a while to embark on a UK tour in 2013. As previously announced, dates begin in May in Cheltenham on the 2nd, followed by Bournemouth, Nottingham and many more throughout Britain until concluding in Blackpool on 16th June. The comedian has now added even more shows to his schedule, including a string of them in the autumn.

His new clutch of shows include Bristol on 6th October, Coventry on the 19th and more throughout October and November including Rhyl, two nights in Guildford and two shows at the Hammersmith Apollo to wind things up (that's if he doesn't continue adding more). Tickets to these new "In The Midst Of Crackers" tour dates are on sale now, priced from around £20.

Regular viewers of TV's Have I Got News For You, 8 Out Of 10 Cats and Mock The Week will be familiar with Reginald D. Hunter's mildly-sarcastic, but often, observationally pin-sharp baritone drawl. It's normally followed by laughter - lots of it. From his formative shows in the '90s, preceded by his singular attempt at honing his acting skills in the HBO horror vehicle Tales From The Crypt (he appeared opposite Joe Pesci), Hunter has challenged perceptions of black and white, man and woman and British foibles. He's certainly not short of material, there's enough in the UK to fill a library (that's if you can find one).

After swapping RADA for stand-up (earning the first of many £10 notes to come his way), Hunter's laid-back delivery masks a sharp, alert mind ready to pounce on any indiscretion or faux-pas. After earlier shows were somewhat controversially christened "A Mystery Wrapped In a Nigga" and "Pride & Prejudice... and Niggas", you'd be forgiven for thinking that Hunter's canon fires in one direction. Don't even go there - he remains one of the most observant comedians on the circuit and covers all bases. Who else would (or could) call their new show "In the Midst of Crackers"?