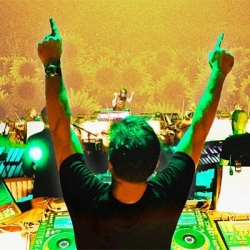 Never mind the Hacienda kick-starting the whole UK clubbing scene in the late '80s, someone has had to help continue the legacy on radio and around the world - step forward Pete Tong. His legendary slot, the Essential Mix on Radio 1, label-ownership (FFRR have issued some of THE club-anthems of the last 20-plus years) and crate-digging exploits around the globe have ensured that the very essence of clubbing has continued, not just with the punters but with up-and-coming DJs aiming to leave their mark on dance-music history. They even named a film about him.

During the '90s, Tong was the go-to remixer, compiler and curator for dance-compilation labels and brands, namely Cream, Ministry of Sound, Essential Selections and Pacha. If you heard a car approaching with its windows wound down and a bowel-vibrating bassline and 4/4 beat blasting out of its stereo, chances are Pete Tong had a hand in it somewhere. His latest release sees him collaborating with German producer Reboot for the mix-CD "Future Music" - it's out now and is a typical upfront array of tracks by new and upcoming names from the world of dance-music.

To this end, news of a Pete Tong event is enough to steer clubbers towards it and the Ibiza legend is playing a few in the UK during the next few weeks, including a string of shows under the All Gone...Pete Tong banner.

In November, Tong will be appearing at Bournemouth's V venue on the 9th (£10) and Reading's Sakura on the 10th as the headliner before heading to Bristol on the 16th for a slot at this year's In:Motion bash at Motion. He'll appear with Booka Shade, Ewan Pearson and many more, all for the handsome price of £16.50.

Tong will then return to Manchester as part of The Warehouse Project's winter season - he'll appear at the Victoria Warehouse on 14th December with Fatboy Slim, Madeon, Basement Jaxx - DJ Set and more. Tickets are down to the last few, priced at £28.50 (cheaper Early Birds have sold out). Reach for the lazers.