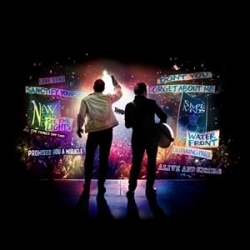 After their recent 5X5 concerts across the UK managed to sell out, it was probably already set in stone that Jim Kerr's men would reconvene for a more comprehensive and wider-reaching tour as soon as possible. And that's precisely what has been confirmed this week. And when we say 'mammoth', we really mean it.

Rather than restrict the 2013 shows to stadiums, an environment that Simple Minds have often frequented in recent decades, the masters of anthemic chart-hits have chosen smaller, more provincial, venues in towns, as well as 'great cities'. Alongside their month-long travels will be a new album, an upgrade to their already-released collections and hit compilations.

Following up last years expansive (but not expensive) "5X5" box-set and tour, which covered just about everything from their first five innovative albums, including gleaming crossover "New Gold Dream", Simple Minds' canon has been picked over once more for "Celebrate: The Greatest Hits", due for release in March 2013. And if you can remember just how many hits that the Minds managed to rack up in the '80s and '90s, you'll be keen to head out of your front-door and down to your local venue to see them perform, right?

The snappily-named Greatest Hits tour will begin in Belfast on 28th March 2013 (guess which tune they'll be performing here!), followed by Carlisle, Newcastle, Aberdeen and loads more across England and Wales such as Llandudno, Plymouth, Margate, Hull, Guildford etc until finishing in East Anglia for shows in Norwich and Ipswich in May.

There is NO London show, or Manchester, Birmingham or Glasgow - this is all about, as Jim Kerr states, "getting up close to so many who have supported us over the last three decades". No doubt the big boys will soon have their fun. They have indeed, promised you a miracle - for a start, that one-way system in Lincoln is a swine.

We will have tickets to all of the tour-dates from 10am on Friday 26th October, with the exception being Belfast (9am). Prices weigh in at around £34-£39.50. And yes, they're bound to sell out at a lot of these venues.