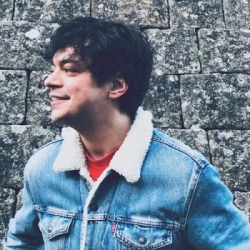 Wouldn't it be great to be able to actually get a cape, don it and then whizz around the country playing songs, getting paid and returning home to bed, safe in the knowledge that you've made a small difference to someone's life by rescuing them from a tree on the way home? Bet Sam Duckworth has also been wishing that ever since christening himself with that stage-name. No more tour-vans. Or bug-ridden mattresses.

Still, he's had an interesting and involved existence as a singer-songwriter since debuting as far back as 2004 - a few rare EPs and demos led to a deal with Atlantic Records, then a couple of Top 30 albums, several high-profile gigs such as Africa Express, headlining the now-defunct Astoria in London, BBC Electric Proms, Glastonbury, Reading, Leeds, NME Awards (nominated for best solo artist in 2007) and even a few releases under his own name. Confused?

Since becoming surplus to requirements at Atlantic, Duckworth has found solace at leading indie Cooking Vinyl, for whom he has recently issued his fourth GCWCF album (actually his fifth overall if you count the solo 2010 album "The Mannequin"). "Maps" might have missed out on the heady heights of 'chartdom' but it's a personal and assured little set that deserves your attention.

Best you head off to his upcoming tour in the autumn, then! First stop for the solo acoustic tour is Bristol on 28th November, followed by Birmingham, Sheffield and several more until Stockton on 8th December. There's a London show (at Madame Jojo's!) and tickets are on sale now, priced from under a tenner upwards.