Walk The Moon set for UK ramble in February 2013

The Cincinnati four-piece kicks off their UK tour in Manchester on 20th February, we'll have tickets available on Friday 5th October 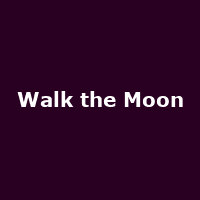 Around two years ago, Nicholas Petricca's band of indie rockers released their second album, I Want! I Want!, to whatever the opposite of 'fanfare' is. But cloaked among its song listing was a time bomb called Anna Sun.

By the middle of 2011, Anna Sun was being hailed as one of the sounds of the summer. But you don't have to take our word for it (you should, though), just ask the good people at Esquire US, at Amazon and MTV; all of whom bestowed various Song of the Year type accolades. It represented a step up for Petricca's four-piece and their full studio (i.e. 'proper') debut album followed this year. The self-titled record made the Billboard Alternative chart Top Ten and, with Anna Sun as the lead single, represented a new dawn for Walk The Moon.

The tour begins in Manchester on 20th February, followed by gigs in Leeds, Bristol and Birmingham, before the final date announced so far at London's Scala on Wednesday 27th February 2013. We will have tickets available from 9am on Friday 5th October, priced around Â£10.