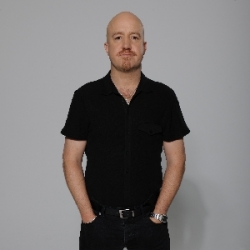 For a man who once described his first job (legal clerk) as "the most tedious thing I have ever done", appearing in front of millions of viewers on TV's satirical panel-game 'Mock the Week' must be a total breeze for Andy Parsons. The affable, yet frequently curmudgeonly, satirist has been a regular on the show since 2006 and has only missed a handful of episodes.

Perhaps the most balanced thinker on the show, Parsons' cutting humour is delivered with a perfect balance of reason, rationale and rant. You have to admire a man who can sum these isles up with a touring show entitled, 'Britain's Got Idiots'. One of his one-liners has an awfully accurate ring to it: "Our cuisine isn't up to much these days. I went into a restaurant to order a baked potato and the assistant asked if I would like chips with that".

Sheer stupidity is often rewarded with a Parsons barb, more of which can be sampled on his next tour. As a precursor to his follow-up show to 2011's 'Gruntled', he has confirmed a string of shows around London's suburbs in the new year, starting with Teddington on 8th January 2013, followed by Kingston-upon-Thames on the 10th and Surbiton on the 18th. More shows may get added in due course - meanwhile, you can pick up tickets from us now, priced at just £10.

Beforehand, Parsons will be appearing at Roar With Laughter 2012 in Hammersmith on Saturday night (6th Oct - £25, proceeds go to Save The Tiger) and Laugh Till It Hurts in Bloomsbury on 18th October (£15 0 in aid of Mind charity). He'll also be performing in Guildford on 7th November (£10).