Posted: 2nd October 2012
The Colonel and the Governor promise a finger-pickin' masterclass on extensive jaunt, tickets on sale now 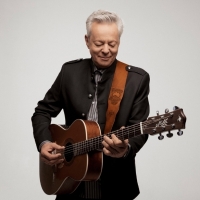 Two of the Commonwealth's most revered and respected acoustic guitarists will come together for a long string of UK shows next year, in support of an eagerly-anticipated collaboration between the pair.

Both Australian Tommy Emmanuel and Brit Martin Taylor have been paving the way for finger-pickers since the '60s when they were knee-high to an effects-pedal, utilizing talents previously displayed by the likes of Chet Atkins and Django Reinhardt respectively. Emmanuel's style is incredibly complex and incorporates elements of treating the guitar as a percussion instrument, as well as incredibly frenetic plucking style. Rock on Tommy, indeed.

Taylor on the other hand, is lighter, jazzier as well as being a previous musician with the great Stephane Grappelli. During the '80s, Taylor signed to high-end audio and hi-fi producer Linn's record-label offshoot (the same stable as The Blue Nile, Claire Martin and Willard White) and scored a near-hit with a breezy rendition of Robert Palmer's 'Johnny and Mary' - if you remember the 'Papa'/'Nicole' car ads for Renault, you'll remember this soundtracking it. Of course, both musicians have been draped with numerous awards and plaudits over the decades, but haven't crossed paths too often until now.

In 2013, Tommy and Martin will become, 'The Colonel and the Governor', both in the studio (for an album already earmarked for release) and in concert. The prospect of two world-class guitarists meeting head-on and also performing a few solo pieces will appeal to musicians and fans alike with a lengthy UK tour now confirmed for a week or so after the album's release.

First stop is Aylesbury on 7th March, followed by Gateshead, Manchester, Wolverhampton and lots more, including a stop in London (Shepherd's Bush), until Edinburgh on the 28th. Tickets are on sale now, priced from around £21.50 upwards (£22.50 for London).