Sooty back for Christmas 2012 with a brand new space adventure

Posted: 1st October 2012
The long-serving star of kids' telly announces (via an interpreter) his plans for a Christmas run at the Duchess Theatre, tickets available now 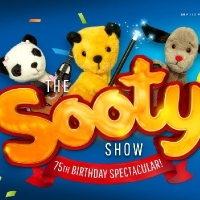 "What's that Sooty, you're planning a mission into space?" For more than 60 years, slightly bewildered children have listened intently as the yellow glove puppet bear whispered his feelings and plans into his friend's ears.

The first of those human friends was originator Harry Corbett (nephew of chip shop king Harry Ramsden), who then passed the yellow hand-warmer onto his son Matthew and then, when Corbett junior retired in 1998, to Matthew's assistant Richard Cadell. Richard has now bought the rights to Sooty, who despite being traded like so much cheap polyester, continues to be a force in the kids' schedules. The mute Sooty, the squeaking Sweep and the unnervingly vocal Soo are currently running a holiday camp in their latest hit run on CITV and planning more adventures.

Surely, the trip into actual orbit* is Sooty's most audacious hoot to date (*not actual orbit) and Sooty in Space promises to be another fun-packed festive extravaganza featuring a 3D movie, "flying cups and saucers, dancing martians and the Super Space Station complete with Sooty's Amazing Robot". In short, great fun for all the family.

Join Richard, Sooty, Sweep and Soo for the Sooty in Space adventure this Christmas at London's Duchess Theatre from Friday 21st December until Saturday 5th January 2013. We have tickets available now, priced from £10 for kids aged under 16, rising to £17.50 for the best stalls (including brochure and goody bag). There are two early afternoon shows daily (12pm and 2pm).