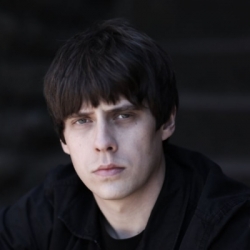 Nottingham looks like being set to become something of a 'buzz'-word for the scene-grabbing music press in the coming weeks - Dog is Dead (on a major label, hotly-tipped), Natalie Duncan (also on a major, due to debut on Jools Holland this week) and Jake Bugg (he's done Holland and is now 'doing' festivals, radio and an album, out in October) have all helped put the East Midlands city back on the right side of the map, rather than being reported in the press after a hail of bullets.

Of the trio, Bugg is already a few rungs up the ladder of recognition after spending a few of his school years heading out to play gigs, coming home rather late and then falling asleep in lessons. Using music as a means to escape the run-down 'trouble-town' areas in his home city, he's succeeded at least in earning a contract with Mercury and a ticket to a bigger world - he was playing Glastonbury at just 17 years of age. As his song 'Lightning Bolt' suggests, he's grabbed the opportunity and has, thus far, ridden it well.

This week, Bugg will be performing a few low-key gigs in Scotland, Liverpool and Belfast, before returning in October for a sold-out gig in Reading and a not-sold-out appearance at Oxford's Gathering on the 20th (£20. Bugg, Dry The River, Bastille, Spector. Bargain). He's then on a (yaaaaawn, sold-out) UK tour in November. Then it's on to next year...

February 2013 will see Jake Bugg again attempt to sell out another long UK tour, all of which will kick off in Sheffield on the 2nd, followed by Lincoln, Leeds, Newcastle and many more until playing his biggest London headliner so far, the Shepherd's Bush Empire on the 27th. We will have tickets to all the shows from 9am Friday 28th September, with prices still reasonable - £12 to £14. Isn't it time you caught the Bugg?