Posted: 21st September 2012
Prior to huge slot at Alexandra Palace, the hardcore punksters will play a trio of regional shows, tickets on sale now 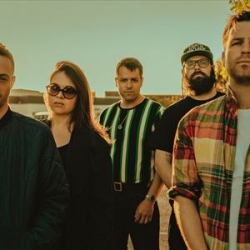 Let's face it - you're not going to get played on MTV being called F*cked Up, are you? But then, you're not going to win friends in 'the biz' by getting all 'lawsuit' with multinationals, performing 12-hour sets, releasing charity singles on vinyl, being mates with Henry Rollins and Jello Biafra, putting out a rock-opera and winning the Canadian equivalent of the Mercury Music Prize ... er, ...oh. hang. on.

Formed in 2001 and labelled as every type of 'punk' genre you could care to throw at them - hardcore, experimental, violent - F*cked Up did indeed get played on MTV live and, according to various reports at the time, took the place apart with the aid of fans (as you do). The embittered vs the establishment - it'll never dissipate. Live shows by Damian (Father) Abraham and co have become something of an event, almost as much as their critically-celebrated albums. That big prize they won? It was Canada's Polaris Music Prize, awarded in 2009 for 'The Chemistry of Common Life', an album full-to-bursting with sonic blasts and vigorous anthems such as 'Magic Word' and 'Golden Seal'. Can you imagine Lauren Laverne reading that nomination out on British telly before 9pm?

Their second album for Matador was the conceptual rock-opera set, 'David Comes to Life'. Issued in 2011, written as a musical and based in Thatcherite Britain, the tale is of love, activism and light-bulbs(!) and has helped steer F*cked Up towards a wider, but not mainstream, audience. Until now, perhaps.

In November, the band will be supporting The Vaccines at their massive Alexandra Palace show in London. Although the show has officially sold out of face-value tickets, Premiums are still knocking around for upwards of £45. If, however, you don't want to see your bank balance get f*cked up by going to see F*cked Up, you'll be pleased to hear that the band will be performing a few 2012 headliners just prior to the capital show.

First stop is Manchester on 14th November, followed by Birmingham on the 15th and Brighton on the 16th. We have tickets available for all three shows, priced at £12.