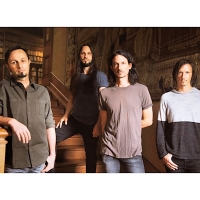 There's a sentence in Gojira's biog (on Wikipedia admittedly) which claims that 'their sound is not easily classifiable' - they're not kidding. Formed in 1996 as Godzilla, the band changed their name (wisely - think of the litigation fees that copyright could rack up) some five years later to a Japanese translation of the same name to Gojira.

Whilst not quite on a par commercially (or musically) with other Gallic exports such as David Guetta, Daft Punk or the late Serge Gainsbourg, Gojira are big business in French metal-circles, for which there is a tight-knit community of black-metal, death-metal and thrash. These guys seem to play all three styles, interspersed with growled environmentally-friendly lyrics and some serious shredding. New album 'L'Enfant Sauvage', issued in the summer, continues this trademark with eleven supercharged songs such as 'The Axe', the title-track and 'Pain is a Master'. In fact, the album has been quite a 'hit' across parts of Europe, Scandinavia, the US, as well as here in the UK - the album reached #53.

To celebrate Gojira's UK tour in November, we can offer pre-Sale tickets (while stocks last) right now. Tickets are available for £14 for all shows from Newcastle on 5th November, through Nottingham, Exeter etc until Southampton on the 15th. The London show on 11th November will cost £16.50. All other shows not on Pre-Sale will go on general retail from Friday 21st September.