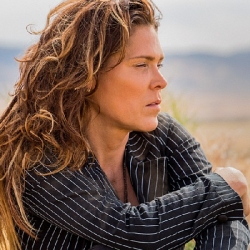 Life begins at 40, so the saying goes, and Beth Hart knows more than most. After successfully hurdling through four decades of toddlerhood, kidulthood and adulthood, the last two decades have been filled to the brim with performing live shows, building up a solid reputation as a mean blues-slinger and working with some of the biggest names in rock. Deep Purple, Slash and Joe Bonamassa are not bad names to have on your CV and all three have previously called upon Hart's services for various releases. She even worked briefly with the late great Les Paul some seven years ago - surely a highlight in a busy career.

After several years of traipsing around clubs in her L.A. hometown, Hart finally hit big with her own material in 2000 when 'L.A.Song (Out Of This Town)' appeared in American teeny snogathon drama, Beverly Hills 90210, giving her wider exposure. After finishing with appearing in a Janis Joplin musical(!) called 'Love, Janis', Hart buckled down to record the first of a successful string of albums starting with 2003's 'Leave The Light On' and which has recently culminated with a 2011 collaborative covers-album, 'Don't Explain' with man of the moment, Joe Bonamassa.

2012/13 sees that culmination revert to continuation with the upcoming release of her ninth album and her first since 2010's solo set, 'My California'. Sporting the near-Eurovision title of 'Bang Bang Boom Boom', the collection sees Hart drape herself seductively over the cover and hitting the hardest notes with sublime ease - in short, she's showing her age in the best possible way and dipping her toes in the swimming pool of the mainstream. New single 'Baddest Blues' has been hammered on Radio 2 of late, so tour tickets for next year look pretty hot right now.

After performing a London show on 16th November at the Forum (tickets still up for £22.50) and seeing out Christmas, Hart will return to the UK for a more in-depth jaunt around the regions (ooer), starting with Glasgow on 3rd March, followed by more dates in Gateshead, Birmingham, Leeds, Cambridge and finally (for now) Portsmouth on 12th March 2013. Tickets are on sale from us on Friday 21st September at 9AM, priced from £20.