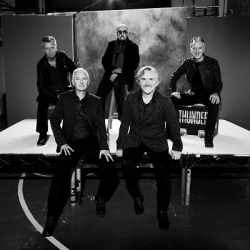 Fans of established UK rock outfit Thunder, will be familiar with the names Luke Morley and Chris Childs - the guitarist and bassist have been injecting their experience and musical cohesion to The Union since the band's formation in 2009, soon after Thunder's break-up. Along with co-founder Peter Shoulder and Phil Martini (from Winterville and Down 'n' Outz respectively), The Union wasted no time in performing live - within six months they were on stage recording a debut live DVD at The Garage.

Such is the band's pedigree, audiences at High Voltage Festival and Sonisphere were soon treated to songs from their debut album and, to paraphrase their first single, The Union truly did 'Step Up To The Plate'. After winning Classic Rock's Best New Band of the Year (somewhat ironic, given the band's collective ages), Morley and co were already planning album number two. 'Siren's Song', issued at the tail-end of 2011, didn't disappoint and the band's credibility amongst fans remained intact.

Album number three continues their relatively prolific output - 'The World is Yours' will see the light of day in February next year and to give fans a taste of what The Union have been spending their Pledge Music money on, they've posted up a downloadable medley of new tracks on their website - good lads. Bigger news is their next tour, of course.

After appearing at Prestatyn's December Hard Rock Hell VI (a few cabins remain, folks), The Union will head out on their own headlining tour in February, starting with Manchester on the 13th and continuing on to Newcastle, Nottingham, Islington and finally Wolverhampton. We will have tickets for all shows from 9AM on Friday 14th September, priced from £12.50 upwards.