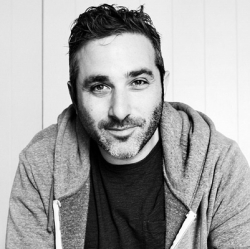 The tagline for DJ Yoda's website reads: "no ordinary scratch DJ". How right he is. Having built up a reputation as a must-see DJ while still studying at Warwick University, it could be said that he has graduated with flying colours.

Early releases include his essential 'How to Cut and Paste Mix Tape' series, all of which playfully blend the cheese with the meat and potatoes of most turntablist's sets with tongue-in-cheek and fingers on the Technics trigger. There aren't many DJs who would have had the nerve to mix Johnny Hates Jazz's 'Turn Back the Clock' with Grandmaster Flash's 'The Message' or dared to include kids' presenter Timmy Mallett in the mix, but Duncan Beiny did on the ''80s Edition' of the series in 2003. But then, if you've been DMC DJ of the Year (2001), you've already trampled down elitist barriers anyway.

In recent years, DJ Yoda has issued several 'Unthugged' albums with Dan Greenpeace and attempted a more straightforward approach to album-making. That is, 'straightforward' in the world of Mr Beiny. His 2006 'debut' includes trademark examples what sound like mini-soundtracks to bonkers Hanna Barbera or Pixar cartoons, but additionally utilizes guest raps from Biz Markie, Sway and Akinyele (amongst others).

2012 will see him carry on this concept with the eagerly awaited 'Chop Suey' album, due for release in November. As a taster to the album, Boy George has been chosen to sing on bouncy summery single 'Happy' (included in this article). Whilst not a typical Yoda scratch-fest, he's present in the mix with George doing his crooning thing over the top - tis rather moreish.

No doubt the tune will pop up at DJ Yoda's big audiovisual shows planned for the autumn. He'll be in Chelmsford on Saturday 22nd September, before resuming in October for a few more shows, including Manchester, Hatfield and Edinburgh, and giving November a good seeing-to in London, Reading and beyond. Pick of the shows is in Bristol on 24th November - he's on the bill with the excellent Ugly Duckling (see our recent article about them) and The Nextmen.

We have tickets for all shows, many priced at around a tenner or less, with his Sunderland show weighing in at a bargain £4! Hurry though - when word gets around, DJ Yoda rarely needs to use the force to sell tickets.