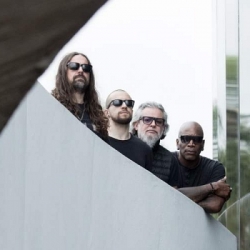 When you've been the front-man in one of South America's hardest rock bands in the world (that'll be Sepultura), you might have been wondering where your next thrill-buzz is going to come from, especially when that said band disbands. Sepultura initially caved in during the mid-'90s after Cavalera called it quits and the band had just racked up a successful album in 'Roots' - they reformed in 1998 and have had moderate success ever since.

Cavalera, on the other hand, formed a US-based metal band called Soulfly and has consistently kept the ball rolling for the best part of 15 years, notching up a swath of Top 75 albums, both in the States and in the UK. The band's eagerly-awaited debut became a modest success across Northern Europe and paved the way for further successes in the UK, such as 'Primitive' and 2008's 'Conquer'. Although metal is sadly rather absent from charts these days, Soulfly's aggression and sheer power mercifully isn't - new album 'Enslaved' features the two newest members, Tony Campos and David Kinkade, as well as contributions from Dez of Coal Chamber/DevilDriver and Travis of the wonderfully sick Cattle Decapitation (sick as in 'bad taste moniker').

The latter features on the album's lead-off single 'World Scum', issued earlier this year, followed by the band's first visit to the UK since 2010. However, these were just tasters for what is about to take place in October - another short jaunt. First stop will be Manchester on the 3rd, followed by Sheffield, Wolverhampton and finally on 8th October, Islington. Tickets are still on sale from us, priced at £15 (or £17.50 for London).