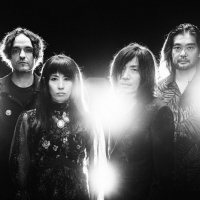 To describe the Japanese attitude to music, any music, as fanatical is, at best, an understatement. Many a UK pop or indie band that has toured Tokyo, Osaka, Kyoto etc has often returned with injuries related to being clawed at, groped and screamed at. Not that the Japanese need British bands - sure they love (worship?) the likes of Blur and classic Brit-Pop, but with so many genres, sub-genres and genres of sub-genres to occupy hi-fis in the Far East, it's become a veritable minefield. Japanese Ska, J-Pop, Extreme Metal, Electropop, Visual Kei and, of course, the phenomena of Karaoke, have ensured that Japan's place in rock history is assured as being even more complex than Britain's.

MONO are currently flying the flag for Japanese post-rock, although the term might mean something a little different in their homeland if the band's latest video adventure is anything to go by. Legend - A Journey Through Iceland is a sumptuous travelogue that takes influence from Godfrey Reggio's Powaqqatsi movie from the '80s and utilizes a dramatic and sweeping classically influenced rock soundtrack that sounds a bit Muse, a bit Mike Oldfield and a tad Ennio Morricone. It is rather beautiful - watch it here. It's like Explosions in the Sky with a symphonic orchestra.

The track ties in nicely with the release of the band's sixth album, released this week. After five albums featuring Steve Albini at the helm, 'For My Parents' sees a switch to the less frenetic world of US producer Henry Hirsch and the installation of a large chamber orchestra. How this will all translate on tour is anyone's guess but you can witness MONO's intensely beautiful wall of sound when they visit the UK in the autumn.

Their first stop will be this year's ATP Nightmare Before Christmas event in Camber Sands (curated by Shellac of North America), before heading out on a headlining tour across the UK and Ireland. Bristol will be the first city on 1st December, followed by Glasgow, Belfast, Cork, Dublin, Manchester and finally Shoreditch's Village Underground on 8th December. Tickets are on sale now via us, priced at £12 (£15 for London).