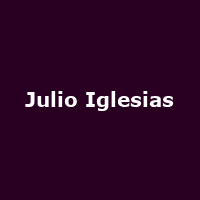 You may remember that a few weeks back we ran a competition to win one of three copies of Spanish singing-legend Julio Iglesias' latest Top 20 album, the collection simply called "1". We had another favourable response and can now reveal the three lucky Julio winners!

Step forward onto the podium, Brian Cook from Malvern, Denice Copland from Perthshire and Jennifer Guertin from Rochdale. Congratulations - a copy of the "1" CD will be heading in your direction very soon.

As you may be aware, Julio Iglesias, father of present-day smoulderer Enrique, has shifted millions and millions of albums worldwide and not just to the Spanish residents - Portuguese, English, German, French, Filipino, you name it, Julio has sung in it, which makes his achievements all the more remarkable. As far as the UK is concerned, a song typically absorbed by British holidaymakers in Spain earned him a turnaround in fortunes and a major international hit. 'Begin the Beguine' is a discofied Spanish-language classic that still has a certain generation, male and female, go all unnecessary.

Not surprisingly, it is this song which kicks off his latest album. Entitled '1', the two-disc set contains re-recordings of 38 of his most famous songs. As well as '...Beguine', there's 'Hey!', 'Amor, Amor, Amor' and cover versions of 'Vincent (Starry Night)' and 'Crazy', plus hit collaborations with Willie Nelson, Sting, Stevie Wonder, Dolly Parton and many more, all given a sprinkle of the old fairy-dust and a new Julio vocal.

Keep an eye out for more exciting competitions coming your way very soon!