Storytime classic Room on the Broom available for 19% off!!

Posted: 1st November 2012
The family favourite from the creators of The Gruffalo opens in November with discounted seats, offer ends January 2013 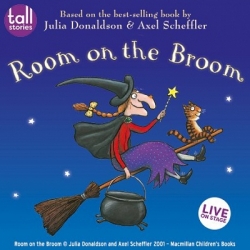 "Over the fields and the forests they flew. The dog wagged his tail and the stormy wind blew." Anyone who knows The Gruffalo will recognise the colourful cadence of the extract as coming from the pen of Axel Scheffler and Children's Laureate Julia Donaldson MBE.

First published just over a decade ago, Room on the Broom is the captivating tale of a witch and her growing menagerie of broom passengers who, after many delightful twists and turns, eventually rise up (literally) to defend the witch from a dragon desperate to EAT HER ALIVE. While not all kids' stories involve such peril, the best ones often do.

And, as with The Gruffalo, in which, you will recall, an affable mouse spends the whole time trying not to be torn limb from limb by various predators, Room on the Broom manages to combine a genuinely engaging tale with glorious phrasing and seductive meter. This stage version comes from the Tall Stories theatre company and promises to be another wholesome treat for the senses.

Room on the Broom Live is at the Lyric Theatre on Shaftesbury Avenue in London's West End from 21st November until 13th January 2013. The show is suitable for children aged 3 years and over and performances are just under an hour long with no interval and to make things a little easier on the pocket, we have discounts to tell you about.

The Special Offer is: Book selected seats to see Room on the Broom at the Lyric Theatre and get 19% off the standard price of £16 - in other words, you pay just £13 per seat! The offer is valid for all performances except those from 17th to 30th December 2012 inclusive. Hurry, as these cheaper tickets will start to dwindle as we approach its run.