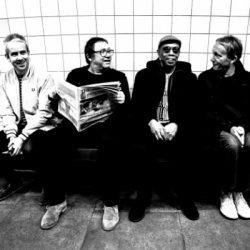 Far from being resurrected guitar pop idols, Birmingham's Ocean Colour Scene have been a going concern since 1989. In 23 years, they've released nine studio records, the most recent being 2010's Saturday. Their self-titled debut had been issued in 1992 and peaked at an underwhelming No 54 on the UK chart.

But not to worry, Britpop was waiting for them and the 1996 follow up, Moseley Shoals, would carve 'OCS' into British indie rock history. Incredibly peaking no higher than No 2, the band's second LP would nonetheless prove to be a launchpad into the stratosphere. Alongside the dizzy ginger splendour of TFI Friday, the baking summer of '96 and England beating the Netherlands 4-1 at Wembley came a soundtrack from Ocean Colour Scene.

The Day We Caught The Train, The Riverboat Song, The Circle and You've Got It Bad were the album's considerable highlights and, for anyone of a certain age, their strains are a hotline straight back to what was, in many ways, a summer of love. Not that OCS sat on their laurels. The next three LPs all made the Top Ten and the next three, in a very different musical landscape, still reached the UK Top 40. Ocean Colour Scene have never gone away and would appear to be here to stay.

The dates announced so far kick off with a double-header in Dublin on 15th and 16th February 2013, followed by two dates in Glasgow (21st and 22nd) and finally a brace of gigs in Camden on 25th and 26th February.

We have tickets available from 9am on Friday 7th September, priced from around £25 for the UK dates and 30 for the Ireland shows. Ahead of the 2013 gigs, you can catch Simon and Oscar from OCS when they tour next month. The jaunt takes in Derby, Preston, Wrexham, Swansea and more before Stoke-on-Trent on 26th October 2012. We have tickets to see Simon and Oscar available now, priced around £15.