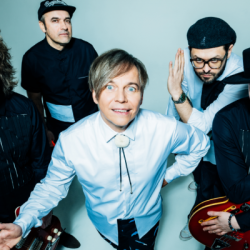 After performing a string of intimate UK shows in recent weeks, Russian rockers Mumiy Troll's efforts are clearly paying dividends. So much so that the "Vladivostock" creators are heading back this way next year for a clutch of far larger shows in big cities.

Much of Mumiy Troll's music has been exclusively Russian in language, but this hasn't stopped Russians resident in the UK from being loyal to their music and their cause. English fans are starting to cotton on as well - two September 2012 shows in Manchester and London completely sold out, plus their November concerts have been selling fast as well.

As part of a promotional drive for their 15th album, 'Vladivostok' (out now), Mumiy Troll will return to the UK for a tour which starts in Birmingham on 21st May 2013, followed by Newcastle on the 22nd, Manchester on the 24th and, finally, Shepherd's Bush on the 25th.

We have tickets for the London now, priced at £20, while the remaining trio go on sale from 9am (Newcastle) or 10am (the rest) on Friday 16th November, priced from around £15.