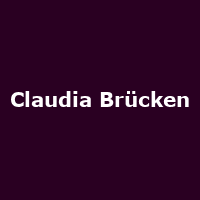 Fans of ex-Propaganda vocalist Claudia BrÃ¼cken will have to wait a little longer to catch her on tour - originally scheduled to perform in November, her European tour-schedule for new album "The Lost Are Found" has dictated a shift for the tour, allowing fans to have a four-month headstart in enjoying the new recordings.

The UK tour will now begin in Glasgow on 12th March 2013, followed by Birmingham, Manchester, London and Brighton. There are still tickets left for all five, priced at Â£18.50 or Â£23.50 for the London show, but note they have been selling fast.

Claudia BrÃ¼cken's career provides a handy narrative of electronica from the early eighties into the new century, complete with beguiling German accent. But hers is not the moody industrialism of Kraftwerk - BrÃ¼cken's oeuvre is far more theatrical and uplifting and it has made her one of pop's most cherished and enduring names.

It is now nearly thirty years since Propaganda's cinematic synthpop excited a generation, with A Secret Wish providing ZTT Records with another success and spawning singles including the evergreen (and still wonderful) Duel. Since Propaganda, BrÃ¼cken has fronted Act and, more recently, joined forces with OMD's Paul Humphreys and released solo material. She's also worked with Erasure's Andy Bell and released material (with Humphreys) as Onetwo. In 2011, her achievements were once again catalogued in the compilation album Combined.

For new album "The Lost Are Found", released on 5th November, she has hooked up with esteemed synth-pop maestro producer Stephen Hague and recorded covers of songs that have influenced and inspired here, including "King's Cross" by Pet Shop Boys, "Road to Happiness" by Lilac Time" and Bowie's "Everyone Says Hi".