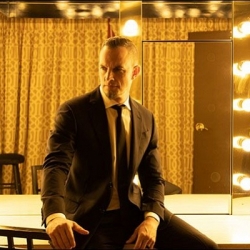 Accolades are something that Creed and Alter Bridge's guitarist Mark Tremonti must be getting used to by now. Various awards and certificates are hung so plentifully in his apartment, they must be troubling the plaster on his walls. Apologies to Mr Tremonti if he has a huge mansion - if you haven't, it isn't through want of trying, right? Grammys, platinum sales and being voted Guitarist of the Year for three consecutive years by Guitar World has got to count for something.

Fans of his 'day-job' bands Creed and Alter Bridge will already be familiar with his intricate axe-work, so the prospect of Tremonti coming to the fore and assembling his own band (which incidentally features Creed's bassist Brain Marshall) should be rather intriguing. The guitarist has been quoted as suggesting that his debut-album 'All I Was' is as 'heavy if not heavier' than his previous work - start salivating now, because he ain't kidding. Billed as a 'speed-metal' album, the July release marks something of a departure from the clean structured heavy-rock of Creed. Several online blog-sites have offered minimum marks of 8 out of 10, so no pressure when the tour starts.

Ah yes, the tour. As well as his own headlining October shows announced for Glasgow (14th), Birmingham (17th) and Manchester (18th), Mark Tremonti has also been invited by Slash to join Ginger (from The Wildhearts) and Myles Kennedy on his October shows in Brixton and Newcastle. That's a lot of guitar.

Tremonti's own headlining shows are on sale now, priced from £16 upwards.

Tickets for the Slash shows are double the price, rising to £35 for Brixton - only Birmingham (9th Oct) and the final of the two Brixton dates (12th Oct) has tickets available at face value.

Hurry - the UK doesn't see much Alter Bridge action so this is a chance for some seriously rare heavy shows.