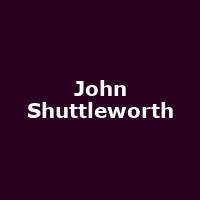 The expressions 'national treasure' or 'British institution' are often used to describe those in the entertainment business whom we have taken to our hearts, either past or present. Stephen Fry, John Peel, Patrick Moore, John Lydon, Greggs the Bakers and Winston Churchill have all received the flattering accolade for one reason or another. Especially Greggs. Nice cheese and onion puffs.

Listen to charming South Yorkshire pigeon-appreciating shed-dwelling Lothario John Shuttleworth for a few minutes and you may find yourself applying the same level of recognition to the man himself. The self-effacing character (played by Graham 'Jilted John' Fellowes since the mid-'80s) is from the same school of comedic thought as Frank Sidebottom, Ted Chippington and Peter Kay's Brian Potter from Phoenix Nights. Deadpan as a dog in drizzle, Shuttleworth's genius is his apparent lack of genius, his appreciation of the simple things in life (his 'agent' and 'neighbour', Ken Worthington, for one) and his unerring self-belief that one day, he'll outsell Vimto. Or perhaps Yorkshire Tea (he advertised it on the telly in 2009).

With previously successful radio-shows ('The Shuttleworths') on BBC Radio 4 and a catalogue of classic songs such as 'Pigeons in Flight' and 'Can't Go Back To Savoury', the album 'One Foot in the Gravy' and tours such as With My Condiments, it's not surprising that he regularly sells out - he is a national treasure, after all. Once described by BBC6 Music's Shaun Keaveney as 'a man who can play the keyboard like wringing a mop', John Shuttleworth will be touring the UK later this year.

The extensive jaunt, entitled the 'Out of Our Sheds' tour, will see John leave the safe confines of his beloved shed to wander wide-eyed beyond the garden-gate to face Britain full-on. He will ponder whether the supermarket is better than the village-shop, or is city-life more comforting than the countryside. Stops in November include Norwich, Derby, Manchester, Birmingham, Brighton etc, while further shows in 2013 call at Sheffield, Bristol and Falmouth, as well as three shows in London. Tickets cost from £15 upwards.

Worthy of a mention is his honorary appearance at the Bloomsbury Theatre on 22nd September, as part of a charity fundraiser also starring Vic Reeves, Heaven 17, Barbara Dickson and Reverend and the Makers. It's for Breast Cancer awareness charity Breakthrough and costs £20.