Posted: 30th August 2012
After the incredible success of her Thoroughly Modern Millican tour, the comic from South Shields has just announced another massive roadtrip for next year and beyond, tickets on sale Friday 31st August 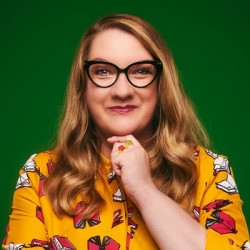 Sarah Millican's last tour, Thoroughly Modern Millican, seemed like it would never top the success of her first national jaunt, Chatterbox. It did.

One might imagine the pressure to follow one incredible success with another is almost too much to bear for some performers. Not for this lass from South Shields. A razor-sharp tongue, a glint in her eye and timing as good as Peter Kay's, Sarah Millican has graduated seamlessly from winning the 2008 Edinburgh Festival Fringe gong for Best Newcomer to become one of the country's most successful stand-ups. From playing bars and backrooms just weeks before that Edinburgh award, the pro-cake Geordie was soon holding audiences of 1,000 or more in the palm of her hand. And she's not stopping there, announcing a massive new tour beginning next autumn.

The 86-date Home Bird tour kicks off in Stockton on 21st September 2013 followed by two shows in Great Yarmouth on 25th and 26th September. The tour runs through until May 2014 with more than one show at many venues and includes stops in Leeds, Swansea, Bristol, Llandudno, Dunstable, Derby and Manchester, London, to name but a token few.

We will have tickets available for these 2013/2014 dates on sale from 10am tomorrow, priced around £25. The Thoroughly Modern Millican and earlier Chatterbox tours were huge (HUGE) sold-out smash hits so do not delay - sales for Home Bird, even this far in advance, are expected to be brisk.

The DVD of the Thoroughly Modern Millican tour will also be released later this year; just in time to make it into your mum's Christmas stocking.