The chart-toppers have announced dates for November and December, tickets are available now 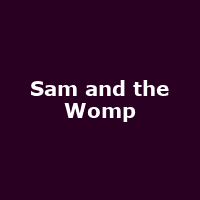 Sam and the Womp

A little over a week ago, Sam and the Womp's three-year journey in the world of Balkan-inspired, ska-influenced electronic pop had yielded disappointingly few headlines. But the download age means that a week can be a long time in terms of hits and misses and 10 days after the issue of their debut single - the insanely infectious Bom Bom - Lady Oo, Aaron Audio and Sam, aka Sam and the Womp, now stand astride the charts.

Bom Bom went straight to No 1 and, despite the absence of an album or EP or any other releases of note, Sam and the Womp, complete with signature Womp dance routine, are suddenly It. Championed by Radio 1 and featured in a TV ad campaign (for Southern Comfort), Bom Bom's loose horns and killer beats are also accompanied by a video vaguely reminiscent of the promo for Deee-Lite's Groove Is In the Heart, with Lady Oo at times channelling Deee-Lite's Lady Miss Kier. Whether Sam and the Womp can emerge from the shadow of their huge hit (Deee-Lite never did) remains to be seen but you can go some way to finding out yourself this autumn.

The tour kicks off at the O2 Academy in Birmingham on 21st November, followed by shows in Manchester, Liverpool, Leeds, London and more before the final date announced so far at The Cooler in Bristol on 7th December 2012. The London gig is at XOYO on Thursday 6th December.

We will have tickets available from Friday 31st August at 9AM, priced Â£9 for London and just Â£8 for the other dates. Given Sam and the Womp's recent success and the comparative low price of tickets, it is expected dates will sell out.