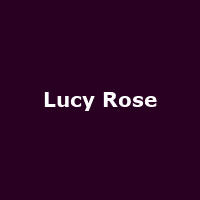 The name Lucy Rose will soon be on many more people's lips, other than a few BBC6 Music DJs, who are currently, loyally, caning her current radio hit, 'Bikes', which has seen the young singer get her account with Columbia Records off to a good start. Infectiously catchy, but on the right side of 'pop', Rose's previous canon with a certain successful indie band has left her in good stead.

Christened Lucy Rose Parton, she wisely eschewed the third name to keep things simple and at just eighteen, ran into Bombay Bicycle Club's frontman Jack Steadman, formed a creative bond and contributed vocals to 'Flaws', the title track of the band's second studio album. But it was for her feminine touch on follow-up 'A Different Kind of Fix' that her name became a little more familiar and Rose set about finishing her own solo work. She even released her own tea which, like her music, is strong with a fragrant overtone (apparently a mix of 'normal' and Earl Grey. One sugar in mine, please).

The result has been a handful of well-received singles such as 'Middle of the Road', 'Red Face' and the most recent 'Bikes', complete with its rather striking video (viewable on her website). All of which has helped Rose get debut-album 'Like I Used To' readied for release in September, not long before she takes to the road for a UK tour.

The jaunt will commence straight after her appearance at Oxford's Gathering, a day festival that will take place at various venues in the city on 20th October - tickets are still up for grabs for £20, for which you get a pass to see Dry The River, Jake Bugg, Hey Sholay, Lucy and loads of others. Her solo tour begins in Nottingham on the 21st and is followed by Birmingham, Sheffield and many more until Brixton's Electric on the 22nd November.

Tickets for many of the shows are on sale now, with the rest available from 9am on Friday 31st August. Ticket cost from £8 to £10 for all shows except London (£11).