Posted: 29th August 2012
The award-winning singer-songwriter follows the release of her eighth studio record with a handful of UK shows in November, tickets on sale Friday 31st August 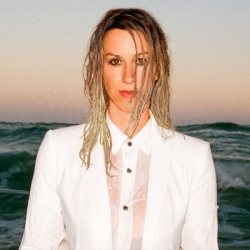 Before Gaga and Ri-Ri, before Beyoncé and Britney even, a comparatively unassuming Canadian was, for a while, the undisputed queen of pop. During the summer of Britpop, Alanis Morissette released an album which was to become a record breaker. Jagged Little Pill, issued in June 1995, would go on to sell 33 million copies worldwide, making it one of the best-selling records of all time, and its blend of bitter angst, delicate hooks and crashing guitars won Morissette Grammys and Junos aplenty.

And she did it without so much as a single wardrobe malfunction or revealing reality show (why must so many female 'icons' come with short skirts?). Anyway, point is, Alanis BOSSED it for a while back then. Huge album sales and a packed trophy cabinet helped the quiet Canadian to a dose of genuine superstardom that few had seen coming when she'd previously released two albums of indifferent post-eighties pop.

That was all more than 15 years ago and Alanis Morissette has since carried her success well. She didn't rush out a slew of poor follow-ups (her latest record is still only her eighth in 20 years of recording) and, by and large, she eschewed the advances of the corporates. Alanis has kept steadily turning out accomplished, slightly folky, pop rock. The new record Havoc and Bright Lights, released last week, followed the lead single, May's Guardian. Once more, the record boasts 'monster' choruses and hooks aplenty.

The short tour kicks off at the O2 Arena on Wednesday 28th November, followed by arena shows in Nottingham (29th) and finally Liverpool (30th). We will have tickets available from 9am on Friday 31st August 2012, priced £35 for Greenwich and £32.50 for the remaining dates.