Acclaimed indie-rockers will now perform a handful of gigs in May, tickets on sale Friday 26th October 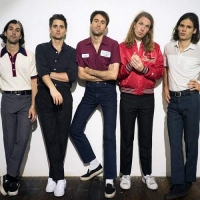 Not surprisingly, The Vaccines new album 'Come of Age' has already proven to be a big hit (a number 1, no less) and the band are looking ahead to playing a string of imminent and very-much-sold-out autumn shows, including a free Hard Rock Cafe appearance in London on 6th November and the first tour-date in Plymouth on 15th November. Trouble is, the bloody radio keeps churning out their new single "I Always Knew", previous single "Teenage Icon" and various sessions and bits and pieces from that #1 album and you can't see the band because there are no more shows, right? Wrong!

As well as the previously-announced and very huge O2 Arena show in London on 2nd May, The Vaccines have very kindly added a slew of new locations to their schedule. The first of these is Margate on 1st May, followed by Carlisle straight after the London show, plus Leeds and finally Llandudno on the 6th. It might not be a huge tour but it's certainly a worthy handful.

We will have tickets to all of the new shows from 9am on Friday 26th October - prices start from Â£18.50.

After a stream of singles issued in 2010 and a BBC Sound of 2011 nomination (they finished third), The Vaccines finally unleashed a terrific debut album, 'What Did You Expect From The Vaccines?', in March of the same year. Key single 'Post Break-Up Sex' was firmly embedded on just about every blogger's blog and every podder's iPod and the album sold well throughout Europe. Back home, they struck at #4, performed over 100 shows (no wonder singer Justin lost his voice) and performed on Top of the Pops annual Christmas show and Later with Jools Holland. They had arrived. They also played Reading and Leeds festivals with some success - now watch them rise even further.