Of Monsters and Men line up early 2013 UK tour

Posted: 21st August 2012
The Icelandic six-piece will be enjoying the relative warmth of a UK winter with seven dates in February and March next year, tickets on sale Friday 24th August 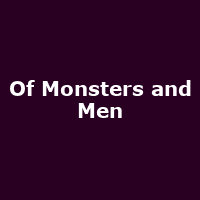 The dreamy folk outfit from Iceland with the unpronounceable names have been making their mark in North America since the release of their debut album in April. The record, My Head Is an Animal, topped the US Alternative chart and reached a hugely impressive No 6 on the main Billboard countdown.

It can come as little surprise, with Of Monsters and Men's style of catchy folky pop offering wide appeal and stirring up something of frenzy across the pond. Just this month has seen some high profile slots at Osheaga Festival in Montreal and at Chicago's Lollapalooza. They're not quite an overnight success, however. The record was limited to an Iceland release when first issued around a year ago and it was only after a sampler EP performed well in the US that the buzz began, eventually culminating in the April release of My Head Is an Animal and the dizzying heights of the Billboard Top Ten. Next up, it's our turn with a 2013 tour to follow a smattering of summer 2012 dates.

Of Monsters and Men kick off their 2013 tour at QMU in Glasgow on 22nd February, followed by dates in Birmingham, Bristol, Oxford, Portsmouth and Norwich, before the final show at Shepherds Bush Empire on 5th March 2013. We will have tickets available for all dates from 9am on Friday 24th August priced £16 for London and £14 for all other dates.

Ahead of the 2013 shows, the Icelanders are playing in Brighton TONIGHT and at Camden's Electric Ballroom tomorrow - we have some Premium (re-sale) tickets available for the Camden gig but you'll have to be quick.

At the weekend they will play the Reading and Leeds Festivals, hitting Leeds on the Friday, Reading on the Sunday. Tickets for Leeds are still available (weekend and day tickets), but Reading has just Friday day tickets available.