Posted: 20th August 2012
The metalcore outfit will be joined by Papa Roach for the opening London show, tickets on sale Thursday 23rd August 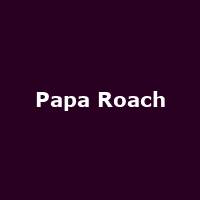 Fifteen years after Corey Taylor joined Slipknot as their lead vocalist, it is remarkable that he or they have any energy left whatsoever. But that's not the half of it. Corey Taylor is, of course, also at the vocal helm of Stone Sour and has been since 1995.

And are Stone Sour a sober anecdote to Slipknot's chaotic blend of noise and colour? In short, no. They are a hard-rock and metal powerhouse who have, apart from an initial five-year hiatus after Taylor joined Slipknot, been splitting ear drums for the thick end of two decades. Quite where Corey gets the energy is anyone's guess.

Stone Sour's fourth studio album sees the band move from 2012 into 2013 in typically flamboyant style with a two-part concept record released later this year and early next. The House of Gold and Bones (Parts I & II) will emerge in October 2012 and then, most likely, May 2013. Between the two releases, Stone Sour will bring the new material and their top-rated back catalogue (the last album, 2010's Audio Secrecy, reached No 6 in the US and the UK) here for a short but predictably noisy burst of dates in the run-up to Christmas. What's more, they'll be joined by Papa Roach for an eye-catching gig at in London.

The tour kicks off with a co-headline date with Papa Roach at the Brixton Academy on Monday 10th December, followed by shows in Manchester (13th) and Wolverhampton (14th), before the final date announced so far at the O2 Academy in Bournemouth on Saturday 15th December. We will have tickets available from 9am on Thursday 23rd August, priced £29.50 for London and £23.50 for other dates.