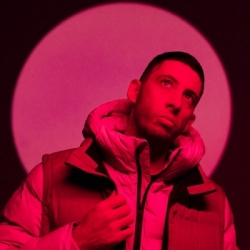 When young rapper, singer and producer Example named his second album 'Won't Go Quietly', it felt and sounded like a mission statement and a portent of things to come - and who could blame him for conjuring up such a title? Previously, Elliot Gleave hadn't troubled the UK market much with his breezy take on 'urban-pop', although he'd gleaned the attentions of Street's Mike Skinner enough to sign him to his The Beats imprint in 2006 and getting a few spins from Pete Tong and Zane Lowe.

Example's cheeky early use of samples (The Carpenters) and subject matter (Lily Allen on the subtle 'Vile' (a play on her hit 'Smile'), ensured notoriety of some sort, but it was the 2009 single 'Watch The Sun Come Up' that transformed his fortunes from Fulham to Ibiza in one euphoric hands-in-the-air swoop. He hasn't been out of the public eye since - hits such as the title-track to 'Won't Go Quietly', 'Kickstarts' and the #1s 'Changed The Way You Kiss Me' and 'Stay Awake' have jettisoned Example into a global arena.

And it's arenas that he will find himself in during 2013 with the announcement of a tour focussing on that very same style of building. The tour dates will begin in Bournemouth on 11th February and continue north to Nottingham, Liverpool, Sheffield etc through Scotland and down to London's Earls Court, before winding up in Manchester on 1st March. Benga will be performing 'live' as the support on all dates.

We will have tickets on sale from 9am on Friday 24th August with prices weighing in at around £25.

The reason for the tour is simple - Example has a new album, 'The Evolution of Man', due out later this year, with a lead-off single, 'Say Nothing' out in September.