Shappi Khorsandi returns to the West End with 2012 residency

Posted: 17th August 2012
Her new show, Dirty Looks and Hopscotch, lands at the Soho Theatre in October - we have tickets available now 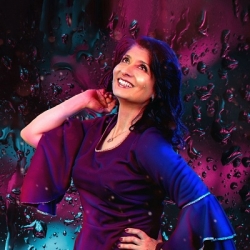 When Shappi Khorsandi first rose to fame, her shtick appeared to make much of her unique position as the UK's leading British-Iranian female comic. Post 9/11, audiences welcomed a performer of Persian heritage laughing at themselves and, in Khorsandi, we found a flag-bearer for the overwhelming amount of Muslims who are 'just like us'.

Bunkum, of course. Shappi was never raised as a Muslim and her comedy played mostly on preconceptions based on origin and skin colour, not her own beliefs or lack of them. The joke was on us, not that we seemed to mind - shows like Asylum Seeker earned Shappi Khorsandi a fierce reputation here, and in Australia, as a razor-sharp comic, irrespective of gender and creed. And her material, once we got over the ill-conceived flattery of a 'Muslim' making 'us' laugh, was familiar, if funny, fare - home life, her brother, her parents, growing up, the world around us.

The brilliance of the stand-up, of course, is to make the standard funny; to find common ground with the audience and make us all laugh. That's the basic mission statement and it is one which could have been written for Shappi Khorsandi. Yes, she's female (obviously) and, yes, she has some Iranian heritage, but first and foremost Khorsandi is a comic. And she'll be making audiences laugh again with Dirty Looks and Hopscotch, an account of her childhood dreams and romantic notions of the future and how these measured up to her actual experiences, not least an 'affair with a rock star'.

A little lazily labelled 'funny and flirty' (surely in the job description for all stand ups?), Shappi Khorsandi is indeed funny and, well, flirty. Maybe that latter tag sits all too conveniently on a female comic... Maybe the joke's still on us.

Shappi's West End residency begins on Tuesday 16th October at the Soho Theatre, running until 3rd November, with no shows on Sundays or Wednesdays. We have tickets available now, priced just £10. Ahead of the autumn run, you can also catch Ms Khorsandi at Laugh Till It Hurts at the Bloomsbury Theatre on 26th September (tickets available now, £17.50) and in Chester on 3rd October (£12.50).