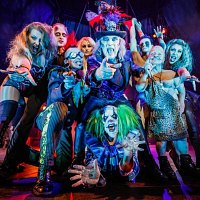 We all like to be frightened. Not in a dark-alley-at-night-in-Hackney way, but in an organized, theatrical, scary, pant-wetting, cardio-testing show like Ghost Stories or The Woman in Black. Taking that premise even further and adding an element of Jackass and Alice Cooper theatre to proceedings is Circus of Horrors who have been turning spines into jelly since 1995. Forget Cirque du Soleil, this is the same with added adult splatter and bizarre stunts and effects.

Taking its name from the 1960 film which starred wonky-eyed creepy archetype Donald Pleasance, the show (much like the film) focuses on good old supernatural, Hammer Horror masochistic freakiness and lewd adult acts and characters with everything for the keenest shockaholics in a wonderfully wicked world. You may have seen a toned version of the show in the 2011 series of Britain's Got Talent. If the likes of Amanda Holden can declare it as "like the Rocky Horror Show, but on acid", you know you need to go and see it.

After the 2012 shows featuring The Ventriloquist (some seats still available) meld into a string of Nightmare Before Xmas events in December(includes Peterborough and Ipswich), Circus of Horrors' attentions will turn to the demise of the Ventriloquist and the (deep breath) beginning of Curse of the Devil Doll. Be afraid. The new Devil Doll show will call at various points across the UK in 2013 including Glasgow, Brighton, Birmingham, Leicester etc currently booked to finish in Halifax on 16th March.

We have tickets to these shows now, priced from around the £20 mark.