Therapy? for A Brief Crack of Live 2012 UK tour 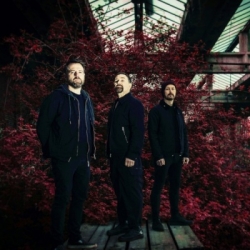 For over twenty years, Northern Ireland agit-rock champions Therapy? have been mercilessly parading their skewed metallic soundscapes, without huge fanfare or the need to take the usual MTV route. Back in the '90s, different magazines fought over who was to score them for a cover-exclusive or interview, mainly because pigeonholing Andy Cairns' outfit was nigh on impossible. With one foot in metal and hardcore and the other in student strongholds, the band were in the enviable position of selling out venues for laughs.

Initially signed to legendary 'riot-grrrl' label Wiiija Records, home of Cornershop and Silverfish, Therapy? distanced themselves from scenes to concentrate on "Babyteeth" and "Pleasure Death" with notorious live shows and Indie Chart takeovers. In 1993, A&M waved some money and hope at them, Hole and Babes in Toyland took them on tour, NME etc tagged them as 'Grunge', sales hit new heights and the band became frequent visitors to the Top of the Pops studios with blazing hits like "Screamager", "Nowhere" and "Trigger Inside". The 1994 album "Troublegum" broke the Top 5, more live shows sold out (I went to one of them in Norwich - brilliant, let me tell you), job done. Or was it?

After releasing the comparatively sober "Infernal Love" album in 1995, a set that featured strings, a Husker Du cover (excellent too) and a less frenetic sound overall, casual fans drifted away and Therapy? attained a level of cult worship - and still do. 2012 will prove that because Cairns and crew have a blistering new single out, "Living in the Shadow of the Terrible Thing", a new album due in the form of "A Brief Crack of Light" and a clutch of live dates.

After a gaggle of summer festival slots and a European jaunt, the band will return to the UK from 23rd November onwards, the first date of their tour in Birmingham. Further towns and cities include Bristol, Nottingham, Reading, Glasgow etc until heading back to London on 7th December. Tickets for Bristol, Nottingham, Manchester and London are on sale now, priced from £15 (£17.50 for London), with the remainder on sale from 9am on Thursday 16th August.