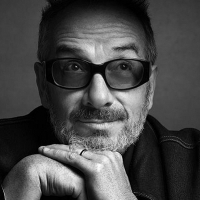 Who'd have thought it - one Declan McManus clearly had a ball during his last UK tour, so much so that he's already announced his return for the spring next year. And if this all feels like déjà vu, you'd be right - we reported on the 2012 version (the 'Revolver' Tour) almost a year ago, only this time, the songs chosen will be different - unless you, the audience, are unlucky enough to pick the same ones again of course.

What are the chances of that happening? Pretty slim. As you may recall, Costello has evolved into a theatrical guardian of 'the Wheel', a huge fairground contraption that injects an element of surprise and lottery about the evening's musical direction. Plastered with the titles of some of Costello's most popular songs (and sometimes, perversely, some new ones), the wheel is spun by your host and members of the audience plucked at random.

Where the wheel will stop, nobody knows but you're guaranteed yet another stirring performance from one of the UK's leading songwriters and it is highly likely that he will pick different songs for another run of the show. Perhaps the Olympic Closing Ceremony could have had him 'doing' a song with Ennis, Wiggins and Farah all having a spin each - "Pump It Up" surely an apt choice for inclusion.

But their loss is your gain - Elvis Costello will be reconvening with his Imposters for another tour in 2013. Entitled the 'Return of the Spectacular Spinning Songbook, the jaunt will take in over a dozen towns and cities, including Basingstoke which missed out last time. The tour starts in Birmingham on 31st May, followed by Cardiff, Bristol, two shows at the Royal Albert hall and many more until Brighton on 22nd June.

We will have tickets for these shows from 9am on 7th September - one must-do date to pop on your calendar!