Posted: 7th August 2012
Further bands to be announced for November shows, the biggest in the magazine's history - tickets on sale Friday 10th August 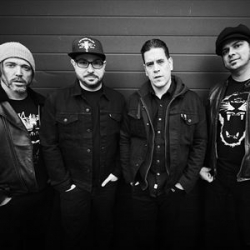 Recently we announced the return of spiky Canadian punk posters Billy Talent - the band will return to the UK and Ireland for a burst of shows in August, starting with some pre-festival headliners in London (16th - now sold out), Edinburgh (20th) and Dublin (22nd), before they attempt to own Reading and Leeds during the August Bank Holiday.

But never mind all that - there is even bigger news to wallow in: a full headline tour for Billy Talent. Organized with those nice fellows at guitar-struck magazine Rock Sound TV, the timidly-titled (ha!) Rock Sound Riot Tour 2012 will not only encompass the talents of Billy Talent but also two other bands (as yet unannounced).

We will have tickets for all shows from 9am on Friday 10th August, with calling points set to include Manchester on 6th November, followed by the likes of Norwich, Nottingham and Bristol, with the London show set to take place at the Roundhouse on the 11th - this marks the biggest Rock Sound tour ever. Before the tour kicks off and almost straight after Reading and Leeds, the band will issue album number four, 'Dead Silence' on 10th September.

Talking of those festivals, it might be an idea to get yourself sorted with tickets. Sunday with the Foo Fighters has sold out, so the only way to see them, The Cure (Friday) and Kasabian (Saturday) is to grab a weekender for £197.50.

The band, formerly known as Pezz, were one of the first pop-punk bands to follow Green Day onto Warner's lucrative tread-mill by issuing their debut album in 2003 and suddenly finding better quality alcohol on their riders. Packed full of racy little numbers such as 'Try Honesty', 'The Ex' and 'Nothing to Lose', the self-titled set was something of a triumph, if not exactly a massive hit over here. Canada has loved them ever since - kids over there can't get enough of Billy Talent, with the debut going platinum and the two subsequent albums, 'II' and 'III', both topping the Canadian charts. 'III' was a considerable success across Europe and even scraped the Top 40 in the UK with their fourth set to follow suit.