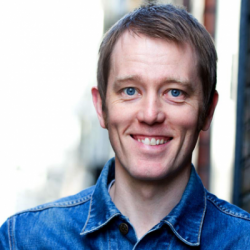 If you need reminding who Alun Cochrane looks like, he's already told you during one of his routines - yes, 'the bloke off the BT adverts'. Now you're re-acquainted, feast your senses on what this man has achieved apart from being very tall and 'the owner of at least four suits'. He chalked up the first of many awards at the Edinburgh Festival Fringe as far back as 2004, by scooping the Perrier Award for his show My Favourite Words in My Best Stories.

For the past eight years, Cochrane has graced the Scottish capital's annual shebang with equally lengthily-titled shows such as 'Jokes. Life. And Jokes about Life', 'Introducing An Introduction To Alun Cochrane's Imagination' and 'Alun Cochrane. Owner of a shed. And a son. Thinks the World is Wonky'. He's also appeared on Frank Skinner's acclaimed Absolute radio show, earning himself the nickname, The Cockerel (by Skinner) and has been a regular on panel-game shows such as Mock The Week. Any comedian who can make you laugh with the quip, 'growing up - I've started watching Newsnight instead of Newsround' deserves a watch.

Cochrane's droll, deliberate, observational and precise style has slowly earned him a wider audience, aided by an appearance on Michael McIntyre's Roadshow on the Beeb, as well as a relentless string of shows which looks set to continue into winter - and by crikey, we'll need a laugh by then.

His tour dates start in Norwich on 18th September, followed by stops in Shrewsbury, York, Hull and more before playing two shows at London's Leicester Square Theatre and Manchester's Comedy Store in December. His jaunt continues into 2013, ending in Salford on 25th May. We have tickets to most shows, all starting at around the £12 mark.