The sets, props and secrets from the smash-hit Harry Potter films are all on display at Warner Bros huge studios near Watford, tickets available now 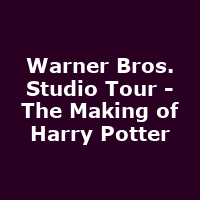 The Making of Harry Potter

The spectre of Voldemort rising amid the smoke and mirrors of the Olympics opening ceremony a week or two back will no doubt have ignited hopes of one Harry Potter emerging to smite his old enemy in the stadium. Alas, Harry was unable to make it and it was left to the muggles to take down the dark wizard.

But Harry Potter is, and will for years to come, be in the hearts and minds of children everywhere. A year after the last film was released and four years after the final chapter of the book series was published, Pottermania seems largely undiminished. And that's hardly surprising given the franchise's unprecedented success. The seven books have sold around half-a-billion copies and eight films have grossed nearly $8 billion worldwide, making creator JK Rowling wealthier than the Queen and creating megastars of Harry and Hermione. And maybe Ron.

If the brand has an enduring sense of permanence then it owes much to a careful marketing and merchandising strategy and doing things like keeping the sets from the films for future generations to enjoy. And that is exactly what Warner Bros have done. Not far from the unassuming destination of Watford Junction sits a treasure trove for Potter fans including the Great Hall, Dumbledore's office, Diagon Alley, Hagrid's Hut and many more iconic settings. Then there's the props including Harry's Nimbus 200 broomstick Hagrid's motorbike and a whole host of behind-the-scenes experiences.

The Making of Harry Potter tour is available to book now until 31st March 2013. The studio tour last three hours and our tickets include a bus pick-up from central London, at Fountain Square (Victoria). Tickets are available now priced Â£55 for adults and Â£50 for children, which includes the bus transfer. Departure times from Victoria are 8am, 11am or 2pm - be sure to arrive no less than 15 minutes prior to departure.